Dealing with the NHS requires a bucket-load of perseverance right from the word go. This is definitely my message to others: keep at it, persevere!

The lack of joined-up-ness at my hospital is exasperating. Of course, not all hospitals are the same - perhaps there are some that work brilliantly? But as a former NHS employee, I know that the NHS doesn't, at times, work for the patient. My knowledge of the system helps.

In my case, the consultant said he would see me in two weeks. When I relayed this to the clinic nurse I was met with a sharp intake of breath and protestations that this was not possible due to the wait time pressures. After receiving no appointment, I spoke with an administrator. I was told that as they were short staffed, they had a large backlog of referrals to deal with. My paper file was lost in a pile of other files with no apparent process of prioritisation. After repeated chasing I was next seen 7 weeks later.

Had I not chased this, who knows when I’d have seen the doctor?

I am regularly bounced from one separate and unrelated department to another. When the staff at outpatients could not offer my next appointment, my details were sent back to the Choose and Book Team. One thing many don't recognise is that the Choose and Book Team is a standalone service taking its direction from the referring department. At times there appears to be little subsequent liaison between Choose and Book and the referrer resulting in a reliance on you, the patient, to initiate progress.

Without me pulling all the strands of appointments and care together, my treatment would be delayed. I have to persevere: to chase and point out mistakes.  And this continues long after treatment finishes, throughout your routine scans and follow-up appointments. 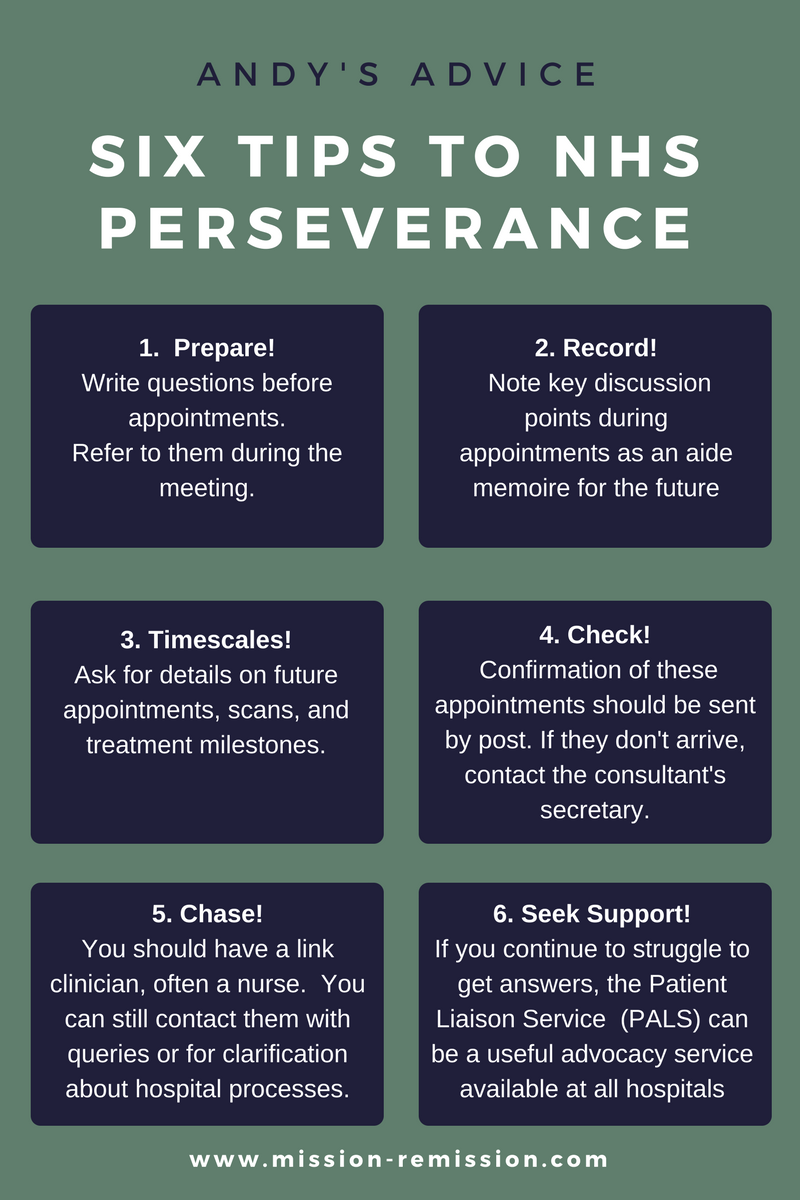 Of course, perseverance is crucial to all cancer sufferers - we need a good dose of it throughout the process – from investigation, diagnosis, through treatment. So don’t think you can’t do this – don’t think that you’ve had enough and you don’t need to chase the system anymore. You need to keep going – and you can do it!

Receiving a diagnosis of cancer will always come as a terrible shock. In my case that was particularly so given I was symptom free and feeling fine.

I had been attending my GP for an annual Well Man check up - a bit like a physical 'mot'.

Unbeknown to me, as my GP felt it had been unexceptional, my PSA levels had been creeping up over a couple of years. Prostate Specific Antigen levels in the blood are an indicator of potential problems with the prostate gland.

As I was relatively young - in my mid 50s - I was referred to the Urology Department of my local hospital for further investigation just as a precaution.

At this stage I was not too alarmed and felt it to be in my best interests to get checked out - better to be safe than sorry.

Whilst not committing himself and following several tests my consultant was definitely giving me the sense that he thought I had a problem. It was becoming a continuing process of investigation depending on 'how ostrich like' I wanted to be - which I took to mean I was on a journey towards the inevitable.

But from here, it took nearly two months until my next appointment. Despite the consultant arranging to see me in two weeks, my case was not prioritised. I had to do a lot of chasing.

My final investigation was particularly unpleasant involving the insertion of a large metal probe into my anus and firing fine needles into my prostate in order to obtain a number of samples - all without anaesthesia. Humiliating and embarrassing, but necessary.

317 people found this helpful. Let us know if you did so we can keep it up.

If only they’d diagnosed me earlier

How can advocacy help you?

Be your own champion

Thanks for sharing your experiences Andy x

In September I was told " next review in January
In March I was told " You're on the waiting list"
In May an admin at my GP surgery was told " He's on a waiting list"
In June I googled the hospital and put in a complaint, wasn't long before I got a phone call " If you're Ok seeing another Dr not the top man we can see you in 2 weeks"
Appointment sorted
Be determined

Andy
Your story is so typical - and proves that we need to be alert otherwise we don't get the care we should. I have been persistently bugging the NHS to improve, and have managed to get a few minor successes. I think we all need to join up together to stand together and help improve the NHS. If anyone is up for this, I can be contacted on verite@greenbee.net. Am running a Wellness Day if anyone is interested email me.

Keep going! I’m sorry it was such a struggle. The hospital (Hammersmith) I was treated at couldn’t be faulted for it's efficiency. Everything is dealt with quickly and I receive details of appointments and scans immediately. I think they should pass their system onto other hospitals to save people like you so much additional stress at a very stressful time. Good luck.