How can advocacy help you?

“It keeps me busy and sane"

For many of us, patient advocacy is as much a part of our treatment as the medication we take. It comes in many forms, from speaking up about your treatment and dealing with its side effects to fighting for healthcare policy changes so everyone gets the medical care they need.

Research shows that those of us who empower ourselves live longer.

Kelly Turner, author of Radical Remission, has studied more than 6,000 patients whose cancer has mysteriously subsided. Among the behaviours that these patients share are empowering themselves and finding strong reasons to live. This could include advocacy work such as developing legislation or working with researchers to give input on designing clinical trials, she says.

Take Jo Taylor, of Saddleworth near Manchester. She was diagnosed with breast cancer 13 years ago. Angered by the first surgeon she saw, she sought a second opinion from a doctor her sister-in-law recommended.

“Advocacy played a huge part in my treatment. I didn’t want people to have to go through what I did.”

Seven years later she was diagnosed with a recurrence in her neck and sternum. After removal of the lymph nodes and reconstruction of her sternum, she's been on a cocktail of drugs that has kept the cancer at bay.

“Advocacy played a huge part in my treatment. I didn’t want people to have to go through what I did,” says Jo, who has released a book of patient stories on her website www.abcdiagnosis.co.uk.

“It keeps me busy and sane with such a scary disease as secondary breast cancer, which is every patient’s worse nightmare. To understand and have knowledge about your disease so that you are aware of what you are dealing with is important.  It helps me deal with health decisions as I go in and out of remission because I now have such knowledgeable friends.”

In addition to her upcoming book, Jo created two infographics about warning signs for ductal and lobular breast cancer that the NHS now gives out to patients to make them aware of symptoms.

She's also active in METUPUK, a group that aims to increase research funding for treatment of secondary breast cancer. And she runs a yearly two-day exercise retreat for cancer patients in the North West.

"We have many inequalities in the UK, particularly around making drugs available to patients, from access to drugs and clinical trials to healthcare rationing. With a two-to-three-year median life expectancy for metastatic breast cancer, waiting two years for a drug to come through the system can be deadly,” she says. “Clinical trials need huge change.” 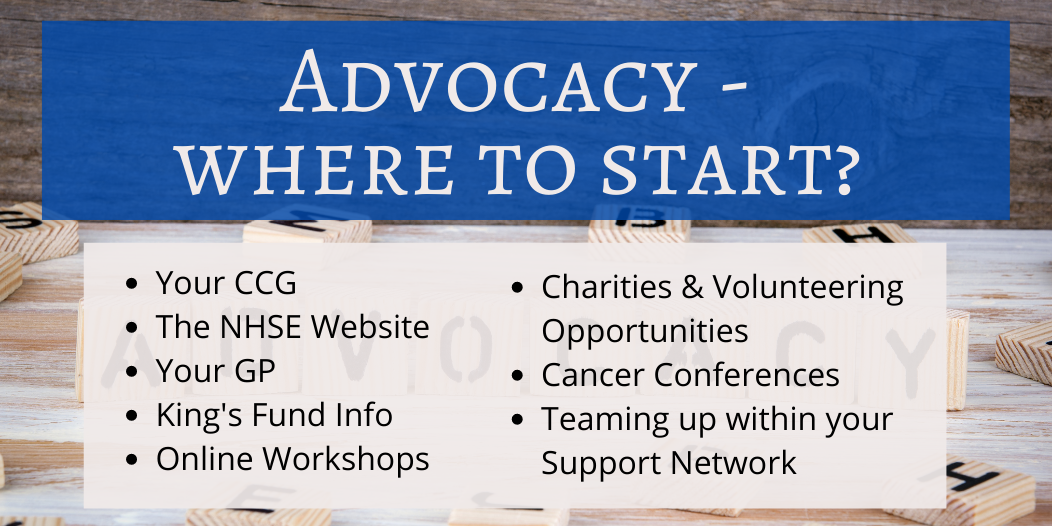 So how do you become an advocate?

It can be as simple as just being informed about your disease, what’s going on in the research field or talking to your oncologist about lifestyle choices you can make so that your drugs are more effective. Those choices could include diet, exercise or alternative therapies such as meditation or acupuncture to help anxiety, some of which may be offered at your hospital.

If you want to ramp it up a notch, noddle around on your hospital’s website, local CCG (clinical commissioning group), or the NHS England website and take a look at the opportunities. Or you could band up with others in your support network, or contact charities like Mission Remission to get involved with their early diagnosis campaign. You can also ask your doctor to put you in touch with any contacts who can help you find local patient advocacy programmes.

There are also plenty of online workshops, certification courses and classes available. The King's Fund offer some great online resources. In the US they have some ideas listed on StandUpToCancer’s website: https://standuptocancer.org/advocacy/.

Consider attending a cancer conference, some of which are being offered virtually because of COVID19 and are free to the public. It’s a great way to network with other cancer patients and meet researchers on the frontlines of a potential cure or life-extending drug. They are often looking for patient speakers to share their fresh and impassioned ideas.

“With the worldwide COVID19 pandemic we are hoping now is the time that people realise things must change. Cooperation is key, not working in silos, to help people live longer,” says Jo.

And my story of advocacy?

I’d been in remission for nearly two years when a routine PET scan showed something fishy in my neck.

“Unlikely breast cancer,” read the report. As someone with secondary breast cancer, this came as both potentially good and bad news. Good news, it’s a new and therefore curable cancer. Bad news, it’s still cancer, meaning I’d be subjected to all the treatments and side effects that go along with it.

It would take a month of tests and surgeries to find out that what looked like thyroid cancer on a PET scan turned out to be something benign on my thyroid and malignant breast cancer cells returning to nearby lymph nodes in my neck.

That’s where the real battle began.  I had several options. Stay on the medication I was on and add something to give it a boost, try radiating the spot and stay the course, or try something new, a drug approved for other cancers, but not specifically breast cancer.

At first, my radiologist suggested radiation, until the health insurance company refused to pay for it unless I was in pain.

My oncologist and I had been down this road before with my health insurance company. Two years ago, she’d recommended an anti-androgen drug as my cancer feasts on all things hormonal in my body. The health insurance company denied her treatment plan, despite the reams of research she provided, as the drug was approved for prostate cancer but not breast cancer.

This time she recommended a similar but cheaper drug. Miraculously, my health insurance company approved it.

In the six years I’ve spent keeping a lid on my disease – which has included several spells of remission – this battle has gone from being personal to political.

As my oncologist did battle with my health insurance company, I reached out to my representative there to ask precisely how the appeals process works. What criteria do they use to decide an appeal? What made them say no last time and yes this time?

The only answer I got was to call the appeals hotline, leave my number and someone would get back to me to hear my complaint.

The next call I made was to another important member of my healthcare team – my congressman, the U.S. equivalent to a member of parliament. Certainly, there should be a law the mandates that I, as the health insurer’s client, should be able to glean what information the company needs to decide what treatment course it will pay for.

As cancer research begins to turn the disease on its head, those of us with the disease have potential options that we’re unable to access because of cumbersome regulations, restrictive policies implemented by our health insurer or lack of resources at our healthcare facilities. For many of us, health care isn’t just a fight to stay well, it’s a fight for access to drugs that will keep us alive longer.

Liz Johnson is a writer, blogger, advocate, activist and adventurer. She was diagnosed in 2015 with secondary breast cancer. She lives in Frenchtown, New Jersey where she serves on borough council and as the town’s sewer commissioner.  She enjoys long walks along the Delaware River with her husband Tom and dog Speck (aka Spectacular). She writes about her advocacy efforts at www.breastcancerconscript.com

25 people found this helpful. Let us know if you did so we can keep it up.

If only they’d diagnosed me earlier

Be your own champion