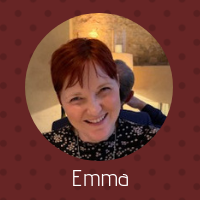 When 'hot and steamy' in the bedroom takes on a whole new meaning!

A little-known impact of cancer treatment, and certainly one that I had never heard of prior to my own brush with cancer, is the impact that it can have on your hormones, and potential early onset menopause. I guess if you stop to think about it, you expect that any gynaecological cancer such as ovarian or womb cancer are probably going to impact your long-term fertility, and any surgery in this area is likely to impact your hormones and subsequent menopausal status. But who thinks about it until they have to?

And what I certainly never appreciated previously was the fact that many breast cancers can be hormonally driven, and therefore in order to keep the cancer at bay your hormones need to be suppressed.

Or (as was the case with me) even if your cancer has nothing to do with hormones, the chemotherapy itself is brutal on the ovaries and can create a chemically induced menopause – even if this is a temporary situation. So imagine my shock when, whilst still reeling from the news that I had cancer at the tender age of 40 I was told that the chemotherapy that I was about to be given was likely to induce an early menopause… and this may or may not be a permanent situation. 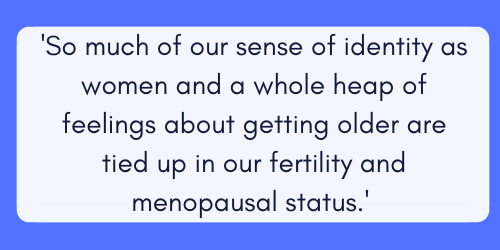 Now, I have two wonderful children and absolutely no plans to add to my family, but being given this news automatically made me feel sad. I guess there is a difference between choosing not to have any more children and having that choice taken away. I can only imagine how heart-breaking that news must be for those that have not started their family yet, and consider myself extremely thankful that I am not in that situation.

You don’t realise it until you are confronted with the potential early loss of fertility but so much of our sense of identity as women and a whole heap of feelings about age and getting older are tied up in our fertility and menopausal status.

This was just another part of the ‘cancer journey’ that I certainly hadn’t ever bargained on. It all adds to the mass of emotions that swirl through your brain as you try to adjust to the news. Initially I didn’t really take it in – menopause… WTF!

However, given that I am never knowingly under-prepared for anything I decided to look into what this actually meant and instantly wished I hadn’t. Menopause was one of those things that I had conveniently tucked away into the ‘don’t need to think about it yet’ sections of my brain, and here it was, rearing its monstrous hormone-crazed head!

When I read the list of menopause symptoms my first thought was one of horror, shortly followed by… “WTF is vaginal dryness!?!” This isn’t really something I ever wanted to think about, and definitely not something I ever thought I would be writing about!

Having already been told that chemo would make any bodily fluids toxic, and knowing that I had breast surgery ahead of me; the prospect of one boob and a toxic, dried up vagina nearly made me want to run screaming in the other direction! I’m not saying it was a rational train of thought and clearly my mind was looking at the worst case scenarios here (I feel it is important to reassure you that this was not the reality too!) but there was definitely a moment when I honestly thought “Um… no thanks, I think I’d rather keep the cancer actually!”

Obviously, this wasn’t actually an option, and so into treatment we went…

I think it was somewhere between my second and third round of chemo that I really started to notice the effects of my chemo-pause. I was watching an episode of Britain’s Got Talent, and all of a sudden I was crying my eyes out at the “heartfelt” back stories that I normally roll my eyes at. Meanwhile, I was periodically having to strip blankets and clothes off, then on again, then off again. It had begun…

It was funny initially, and then started getting less so. By the time we got to the Paclitaxol stage of chemo, it was unrelenting. The supermarket became a minefield – between the coldness of the refrigerated sections and mild stress of the checkout till and getting my purchases packed up, I would emerge a broken, sweaty mess. I couldn’t even step into the coffee shop as it turned out that caffeine was a major hot flush trigger too, along with wine, I mean seriously.

Restricting access to these things could send any woman over the edge, let alone one who is in the throes of a menopausal mood swing! How I didn’t kill someone I’m still not entirely sure… It became a running joke with my family as the most minor stresses of the day would make me “HOT, HOT, HOT!” – Parallel parking? Flush! Driving in general? Can’t breathe, sweating! Cooking a roast dinner and trying to get everything timed right? Send the fire brigade!

Being at work and trying to remain professional in a meeting whilst feeling the flush rise from your stomach to the top of your head was horrific. I lost any sense of poker face: there was no hiding my feelings as you could gauge exactly how I felt about everything based on how red, sweaty and breathless I was.

All of this is tied in with the fact that menopause or in fact anything related to ‘women’s stuff’ still seems to hold a massive taboo in our society. You can literally feel how uncomfortable it makes people, no matter how much you try to laugh the situation off.

Obviously. I didn’t notice any thinning hair (as I was completely bald at the time!) but my skin did become dry, thin and would graze easily, and the night sweats were the worst. My whole night would be an endless struggle between being too hot and waking up sweating from head to toe, throwing off all the covers and then freezing to death. I barely slept for months and this left me tired and grumpy in the day-time.

My sex life was affected too – without wanting to go into too much detail, it is safe to say that everything took a lot more effort… So, with all of this going on it is really no wonder that mood swings are such a major part of the symptoms!

As my breast cancer was triple negative, and therefore not hormone driven, I begged both my GP and my oncologist to let me have HRT, they refused. It made me furious! My GP did prescribe a low dose of anti-depressants and blood pressure tablets that have also been shown to help with hot flushes, but I didn’t personally get on with them so that put paid to that. However, if you are suffering, then it is worth asking about and giving it a go as you may well react more positively to the medication than I did.

I spent hours researching the web for possible solutions to relieve the misery and tried endless tips and tricks in the quest of managing menopausal symptoms. The following are what I found worked best for me:

I consider myself very fortunate that 8-months post-chemo and with no hormone suppressing treatment in my plan, symptoms reduced dramatically and things are all back to normal. I am one of the lucky ones for whom this was a very temporary situation.

For those of you still in the hot and sweaty clutches of your treatment-induced menopause, the following little definition of this particular time of life will either make you laugh or cry, depending on where your mood is at right now. Either way, I won’t tell you to find your ‘roar’ today as I imagine you find it quite regularly and possibly sometimes when you don’t really mean to, but I do hope you keep fighting fierce!

Menopause /meno-poz/ Definition: Derived from the Latin root of WTF is happening to me… the time of life when a woman doesn’t know if she is coming or going, on fire or freezing, happy or sad, wants to diet or eat everything in sight. Women in menopause may self-medicate with: wine, chocolate, vodka, ice cream, carbs, new shoes, online purchases, Netflix or looking at pictures of Tom Hardy ?

I'm Emma, a regular mum, wife, dog-owner, boss - all round normal (and probably quite boring) person - now breast cancer survivor and start-up business owner. In early 2017 a few months after my 40th birthday, I was diagnosed with grade 3 triple negative breast cancer, and subsequently underwent 8 rounds of chemo, a lumpectomy and then 20 radiotherapy sessions. I finished treatment in December 2017 and fingers crossed I’m one year clear and counting.

As a result of my experiences, I set up Lions, Tigers & Bears - a website for people affected by cancer, offering three core elements - a shop, a blog and launching in 2019, a services directory.

My goal is that whatever you need throughout treatment and beyond - whether it be a product, a therapist, a professional service or advice and support, you can find it there.

I hand-select all products within the shop with a particular emphasis on independent brands, and in-line with my own values and beliefs, they’re ethical, sustainable, conscious, cruelty-free and toxin-free living. I strongly believe that cancer is what you have, not who you are, and that a diagnosis does not equal a style lobotomy! My mission is to help you find your roar and manage your diagnosis with style, sass, and confidence!

88 people found this helpful. Let us know if you did so we can keep it up.

1 Yr 3 months past chemo no periods since 3rd rchop bang in menopause I had weight gain plus very recently kidney 55 pc and type 2 diabetes which can be rectified with diet n exercise which I have been doing since lockdown. Lack of sleep with menopause is horrible but as we got through chemo will get through this