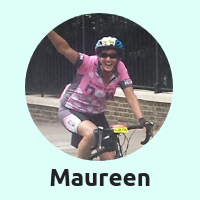 In the opening page of a Carol Shields book, one of the characters talks of the ‘repellent strategy’ of counting your blessings.

The character rails against people who ‘believe a dramatic loss can be replaced by the renewed appreciation of all that one has been given.’

I got what she meant immediately.

I’ve never been a fan of counting my blessings. I always felt it was akin to tempting fate. Before now though, I’d never heard the sentiment expressed so articulately.

I think back to my state of mind for a good while after I completed seven months of treatment for Stage 3a breast cancer in February 2016. Treatment consisted of chemo, mastectomy and radiotherapy – the whole caboodle. After treatment finished, I was in a high state of anxiety. I was convinced it was just a matter of time before my cancer turned up somewhere else in my body and started the process of finishing me off. There were plenty of good things in my life at the time, and I was well aware of them. However, the idea that simply focusing on them would rid me of my anxiety was laughable.

Tig Notaro, an American stand-up comic who’s had breast cancer, has written about the days when she could ‘only sit very still on my couch, trying to breathe. I felt like I was about to lose my balance and fall off not only the couch, but the planet entirely.’

I remember that feeling only too well.

It wasn’t counting my blessings that helped in the end. Most fundamentally, it was acknowledging that this was a perfectly legitimate reaction to the traumatic events that I was experiencing.

As newspaper columnist Annalisa Barbieri wrote just recently in The Guardian in response to a reader’s problem: “I think [advising you to] stop stressing about something that matters so much to you is asking a lot, and maybe you need to allow yourself to be who you are at this time.”

Scared was what I was and that was ok. Once I’d acknowledged that, I was able to take steps to deal with it all.

I knew that worrying was making me miserable and I desperately disliked being miserable. I realised that if my cancer did return, I wouldn’t want to look back and see I’d spent the whole time between treatment and recurrence worrying.

Also, and this to me was critical, it seemed that some people with far bigger issues were coping better than I was. Of course, you don’t know how much someone is worrying unless they tell you, but it made me realise there was no rule that said I had to worry myself sick over anything.

So I took action

I talked to people about how I felt. I went on a course where I learned distraction techniques and devices for managing negative thinking and worry. I learned how to distance myself from my thoughts and I now have a good set of tools to help me fend off these bouts of fear, anxiety, dread – call it what you will – whenever they appear and whatever they’re about.

For example, I find the worry tree really helpful. I learned the importance of living in the now. ‘Today I am healthy, today I am well’ is one of my favourite mantras. Also, another health issue in the interim – microinvasive melanoma on my right calf – pulled me up short and made me realise the futility of worry. Worrying about one thing doesn’t stop other – potentially worse – things from happening.

And of course, exercise helps. Lots of it, in my case. Never fails to cheer me up.

I can only hope my breast cancer doesn’t come back, despite me being at high risk of it doing so. I still think about that every day. Indeed, there are days when I realise I’ve been thinking deep, dark thoughts for longer than is healthy. That’s when I’ve got to work hard to force myself back into the present.

Life has plenty of challenges. Part of the key to being content is, I believe, accepting that ups and downs are normal. It’s not all or nothing.

I think back again to when I was first diagnosed in July 2015. I’d walk down crowded streets thinking no-one else had a care in the world. I wanted to scream at people and tell them to wake up, tell them they had no idea how lucky they were, tell them to appreciate their good fortune. That was, of course, nonsense. By the time we’ve reached a certain age, most of us have “cares” of some sort or other, some far more serious than others. Most of us find a way of muddling through.

So now, in essence, I’m happy to be here, loving life and all the good things in it. But never complacent or carefree, and always aware it could be snatched away at any time. I could count my blessings, but I’d rather not. Like millions of others, I’m just trying to deal as best I can with whatever life throws at me – the good, the bad and everything in between.

Maureen started blogging shortly after being diagnosed with Stage 3a breast cancer in July 2015 at the age of 52. She underwent chemotherapy, surgery and radiotherapy over a period of seven months and, almost three years after finishing treatment, is very grateful to be in good health. You can read Maureen's blog here: https://iamtheoneineight.wordpress.com/

1008 people found this helpful. Let us know if you did so we can keep it up.