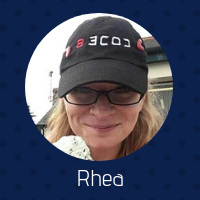 Radiation and chemotherapy, the gifts that keep on giving!

I finished treatment for stage 2b node positive cervical cancer over two years ago when I was 34 and although I am all clear I live with the after effects which are a daily reminder of what I called my ‘dark passenger’.

So what are these effects?! While everyone is different, for me, it’s like living two lives. On the one hand I work full time, I do things with my family (hubby, two young kids, and a dog), I study, I keep active. All sounds pretty good and normal, right?!

However, I am simultaneously managing bowel and bladder symptoms, back, hip and leg pain, peripheral neuropathy, occasional tinnitus, the effects of menopause, and the anxiety and fear of recurrence. So what’s going on and what can you do to help manage this?!

I've been extremely lucky and have visited a late effects clinic only an hour from where I live. Sadly, there aren’t many around the UK but hopefully that is changing with more people surviving cancer.

It was so lovely to speak to professionals who get it and who can reassure me that all the symptoms I experience are likely due to radiation and chemotherapy.

The late effects team advised I eat linseeds to help increase bulk, as well as probiotics as radiation kills the good bacteria in your gut. Those, like me, who don’t have an appendix often experience worse gut symptoms as the appendix is a reservoir for good bacteria (not such a useless organ now hey!).

They also suggested going lactose free, as radiation can damage the villi in the gut which produce lactase which breaks down lactose. The linseeds have worked wonders and I’m now having less abdominal pain, bloating, diarrhoea and frequency although the urgency is still pretty urgent – I’d recommend the Toilet Finder app!

I’ve tried the medications for bladder urgency and frequency such as oxybutinin and solifenacin and I’ve cut out caffeine to help the symptoms. The team suggested my bladder symptoms could be investigated and possibly treated by replacing the collagen which lines the bladder that radiation can damage.

The amazing pelvic health physio gave me exercises to help my pelvic floor as everything is very tight. The tightness makes all my bladder and bowel symptoms worse as well as my pain and sexual function; which is also affected due to radiation as well as due to the hormonal effects of menopause.

The radiographer at the late effects clinic explained that the back and hip pain could easily be explained by the radiation and/or chemotherapy. They can both cause changes to the spinal nerves as well as the bones and soft tissues.

Common musculoskeletal side effects of these treatments include: osteoporosis; insufficiency fractures due to osteoporosis; avascular necrosis where the bone dies due to reduced blood flow; plexopathy where the spinal nerve plexus becomes damaged and causes pain, weakness, reduced sensation, muscle twitches, changes to the way you move/walk and bowel and bladder changes.

The pain is manageable with anti-inflammatory meds, heat, and keeping busy physically and mentally. Although my neuropathy symptoms are worse when I exercise, the back pain is improved and I feel more in control and less like my old “dark passenger” still has a hold over me.

I've also received counselling from Macmillan to try and help process some of what I've been through and the feelings of fear and anxiety regarding recurrence and guilt over what my family have had to go through since my diagnosis and treatment.

It’s also helped process my survivors’ guilt. Each time I complain of a side effect I'm dealing with or hear of someone I know who has died or is incurable I can't help feel guilty. I feel guilty for moaning when I'm still alive and healthy in comparison to so many; guilty that they are going through so much hardship and there's nothing I can do or say except send love.

I wouldn’t change my decision

Although the after effects of treatment are many, I wouldn’t change my decision to have chemotherapy and radiation. I am still here now living well with and beyond cancer. However, I do think that health professionals need to have a conversation with patients about long term effects earlier so they can prepare for the worst whilst hoping for the best and truly make an informed choice.

Special thanks to Lesley Smith and the Pelvic Radiation Disease Association who have been so supportive and informative to so many people like myself and to Dr Lisa Durrant at the South West late effects clinic Taunton.

My name is Rhea. I am a 36 year old wife, mother of two (and one fur baby), pain management clinical nurse specialist and cancer survivor.

When I was told I was in remission seven months after my diagnosis, I thought that a sense of normalcy would return. I didn’t expect to learn that I would need to adjust to living with persistent pain.

148 people found this helpful. Let us know if you did so we can keep it up.

Found this really helpful to know I am not alone in suffering the after effect of chemoradiotherapy. Back at the bone density clinic tommorrow to what awaits there. I may be free of cancer cells but not the after effects. It is draining but I am alive ?